One of the Seven Magnificent - Krka National Park 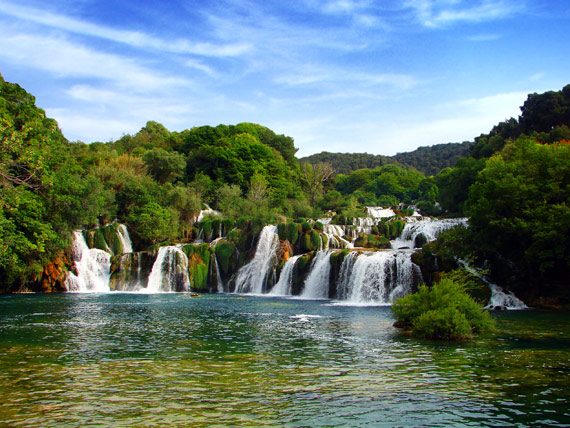 Kr.., kr.. -say what?! Yes, ‘Krka’ is probably one of the most difficult words you’ll pronounce when talking about Croatia. However, if you decide to visit this amazing attraction you’ll surely master the pronunciation in no time because you won’t stop talking about it. A trip to Krka National Park is definitely a trip to consider when visiting Zadar and not only because it’s conveniently near.

More than ‘just another waterfall’

Croatia boasts seven national parks and they are its gems, its wonders of nature. The most renowned by far is the Plitvice Lakes National Park, famous primarily for its lakes and waterfalls. Krka National Park may not be as extensive in its total surface area, but its scenery and waterfalls are just as lovely as Plitvice. People who have visited both have a hard time in deciding which one they prefer, since they both exhibit the extraordinary force of nature.

The area of 109 square kilometres along the Krka river was proclaimed national park in 1985. The river springs in the foothills of Dinara mountain and flows to the sea with the altitude drop of 242 m creating a series of travertine waterfalls, cascades and lakes surrounded by practically unaltered natural environment. The well-preserved ecosystem of the Krka National Park is home to a great variety of flora and fauna, including many endemic as well as endangered species.

Situated quite close to the city of Šibenik and less than a hundred kilometres from Zadar, Krka National Park is the perfect destination for a one day trip. Here are some tips to consider before setting off:

How to get there. If you don’t have a car, the best idea would be to plan a trip with a tourist agency. That way you won’t have to worry about transport and you might get a cheaper entrance ticket, if you go as a group.

What to see/do. Your primary focus will probably be to see the main attractions -  the waterfalls and cascades Skradinski buk and Roški slap as well as the island of Visovac with its monastery. However, bear in mind that as you hike the Park, you’ll be walking along its educational trails, so don’t miss the opportunity to learn about the flora and fauna as well as its cultural and historical heritage. You will, namely, also have the opportunity to see archaeological and ethnological monuments.

What to bring along. A visit to the park does include a boat ride, but keep in mind that it involves walking, walking and walking. This means it’s essential to have appropriate footwear regardless if you go during the summer. Disregard the heat, because you will get the opportunity to refresh yourself since swimming in Krka is allowed in certain areas. So, don’t forget your bathing suit and fully charged mobile phone, because surely you’ll want to take a selfie with cascades in the background.

Krka National Park might just turn out to be one of the loveliest places you visit in Croatia and it truly is worth of at least one-day trip. Just don’t give it too much thought - the wonderful natural surroundings and the waterfalls won’t let you down!